I’m sorry, did you think this was going to be about how to present yourself as an author to readers/interviewers and other such people you’ll be meeting along the way? No no. What I need, dear friends, is your opinion! If you were paying attention to any of my interweb outlets yesterday, you’ll have noticed that the ebook version of Greaveburn is now available for purchase. A-woo-hoo! This is a major step in itself, and I’m absolutely ecstatic, but it’s still just a warm up for the print copies being released on the 20th. Ok, self-plug over. Now what’s the relevance? Well, it’s got me thinking about how a professional writer comes across, and how important it is to how we’re seen. Surely the words are all that matters, right? Well, I don’t know. So, we’ll start with “Does The Look matter?”

Let’s have a think. Picture your favourite author. There aren’t that many, in the grand scheme of things, where I know what they really look like. But the ones that I do know by sight have a very particular look. Let’s have a look at the kind of folk I mean:

Neil Gaiman is  a hero of mine. I’ve never been shy about sharing it. He’s an awesome writer, and incredibly versatile in what he can turn his hand to. I think his first ever book was a biography for Duran Duran (but don’t quote me. I may have my authors mixed up). But his writing isn’t just what makes him so damned cool. Just look at the dude. Long black coat, awesome hair, monochrome photos. He’s like a literary Neo. If only I could pull off an ounce of his coolosity, I’d think myself pretty darn hip and down with the kids.

The original dude of all dudes, as far as I’m concerned. The Discworld series is what got me into the Specualtive Fiction genre, and they still make me laugh on every re-read over 25 years later (Jeez, where did that go?). If anyone doesn’t like my writing, it’s Terry Pratchett’s fault. He inspired me to start creating my own worlds, even if thos early ones will never saw the light of day (and never will *shudder*). But look at him. He has a jaunty hat, he drinks tea, he’s covered in mice. And he still looks like the kind of guy you’d invite round for scones and a laugh. He looks like a really nice guy, and yet you take him seriously, too. Damn it, Terry! How do you do it? 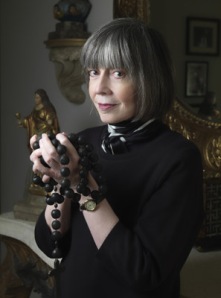 Ok, obvious gender comparisons aside, Anne Rice knows how to work a look (take that Gok Wan). She looks like she would offer you apple pie and a glass of milk, then garrote you with that rosary and drink your blood from your skull. She also looks like she could walk into a room with Lestat and Louis, all nonchalant, and fit right in. She’s awesome; like a badass grandma that could roundhouse your head off with her oxford heels.

The Master himself. He doesn’t need to wear all black, he doesn’t need a cool coat. He’s got his specs and his typewriter, and that’s how he rolls. No one’s saying that Stephen King is going to win any Mr. World competitions. But that’s not the point of him is it? The point is, he could stand in front of Conan the Barbarian on PCP, and Stephen would just talk to him. Nice-and-calm. Before you know it, Conan’s screaming bloody murder and commiting Hara Kiri because he can’t handle the crazy that King has just dropped in his ear. Now THAT’S  a writer! He also looks cool in a stripey shirt, of which I have plenty.

And so what have we learnt? Gaiman teaches us the virtues of awesome hair, cool coats and monochrome. Pratchett accessorises like a boss. Anne Rice preaches the virtues of a simple black number and a statement bob (not a choice I’ll be jumping on, I can assure you). And King shows us that sometimes the backdrop speaks proverbial volumes, and that can be all you need.

What does it all mean for yours truly? For a guy who’s just trying to break into the world of fiction, wielding his copy of Greaveburn like a Judeo-Christian tome and begging to be taken seriously? It means I need to get in the back of my wardrobe and have a rummage, that’s what it means…