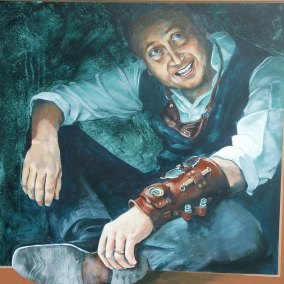 Craig Hallam is an author whose works span all corners of Fantasy, Sci-fi and Horror.

Since his debut in the British Fantasy Society journal in 2008, his tales have nestled twixt the pages of magazines and anthologies the world over. His Gothic Fantasy novel, Greaveburn, Steampunk trilogy, The Adventures of Alan Shaw, and the dark short stories of Not Before Bed have filled the imaginations of geeks, niche and alternative readers with their character-driven style and unusual plots.

Recently taking a short break from fiction, Craig has chronicled his experiences of living with depression and anxiety in Down Days, a blog followed by thousands of people across the globe that will be released in book form in August 2019. Now, back in the fiction saddle, he’s completed a cyberpunk novella featuring non-binary, gender neutral characters in a world where reality and virtual are blurred and humanity reaches toward the final stage of its evolution.

He hopes to see you hovering above one of his pages in the near future.

Check out the Books page for details on his novels, released from Inspired Quill Press.

“A considered dismantling of the macho hero archetype.”

“A kick in the shinplates to more stereotypical fare.”