As promised in a recent post, we’re being visited today by the excellent, fellow Inspired Quill author, Mark Cantrell. Journalist, author, and all-round stand-up human being, Mark is someone who I’ve never met in person, but who has been a constant support throughout my own author journey. Among his many novels, Citizen Zero and Silas Morlock are not-so-distant reflections of our own society, as all good sci-fi should be.

Come and meet him… 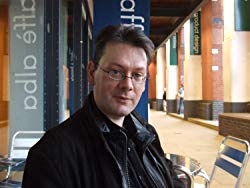 ONE of these days I’ll figure out how to switch off.

No, I’m not talking about relaxing. Well not exactly, more like stepping out of this world and into the ‘zone’ – at least until the over-eager critical faculties crash me down to Earth.

That’s the trouble with internal critics; they can be unsympathetic swine, with little or no regard for the literary process. Going off half-cocked instead of chilling out in the back brain until you’re ready for them, they can seriously cramp a wordsmith’s sanity.

If the creature doesn’t hit mid-flow and crash me out of the ‘zone’, then it undermines my regard for the latest draft I’ve sweated to finish. Snarling that my work is rubbish, it harasses me into a screaming fit, to send me wailing back to the keyboard to start afresh. Stretched thin, and wound-up, brittle me becomes lost in an endless round of sweat, tears and turmoil, while my critic cracks the whip.

Times like that, writing loses its joy, but bloody-minded obsession – maybe that slave-driving critic – won’t let me walk away. I have to keep going until, somehow, I come through the other side with words the critic can’t dismiss. I must admit, there’s a certain smug satisfaction to be had in leaving this mental gremlin speechless, but I know it’ll be back for another headbanging session sooner or later.

We all have our crosses to bear; this is mine. The problem is, as a journalist, I am expected to get my copy right first time. In a busy editorial office there’s no luxury of reworking and polishing an article until it’s ‘just right’. The deadline doesn’t give a damn about precious sentiments of literary art; that’s not what a news or feature article is all about, so get a grip and get that copy filed.

That’s journalism, but what works in the newsroom can play havoc with the author, at least in my case, because it doesn’t necessarily remain there: that damned internal critic demands the same right-first-time standards for my creative writing.

Now, it is possible to get that scene of a novel right first time. I know because I’ve done it, but right first time doesn’t mean to say finished first time. A draft is a draft – and it remains so until the novel is completed ready for publication. Until then, it’s subject to change.

Novels grow organically, I find. For all the planning and thought that goes into their conception and development, they still begin to exert themselves as the characters find their feet – and their voice – and the plot begins to blossom. Sooner or later, the novel starts kicking back and asserting itself.

That’s no bad thing. A novel that remains limp to the author’s touch throughout is nothing but a stillbirth in the making, but when it begins to come alive the newborn beastie needs a little tender discipline to ensure it reaches a healthy maturity. Cue that internal critic; it ought to be a crucial ally but that journalistic ‘right first time’ malady transforms a stern ally into a monster smashing up the lab.

To some extent, I probably owe the critic a begrudged vote of thanks, but let’s not go overboard. Here’s the thing: while at times those over-worked passages have resulted in the goods, more often than not any benefit has been outweighed by the headache involved in the endless re-working. The better re-writes have come at their proper time – in those second or third draft phases.

All the internal critic has really achieved is to hold up the novel’s progress by forcing me to waste time and effort (not to mention sanity) on a part best left to lie fallow in the backbrain for a while.

A novel is rarely – if ever – a continuous stream of structured thought. The whole is assembled from the sum of its parts. The parts, of course, are the disparate scenes and passages that are slotted together to create the seamless whole. It’s all too easy to be caught in the ‘right first time’ trap of endlessly trying to perfect each scene before moving on to the next.

Sure, sometimes, there’s a case to be made for taking another attempt, but for the most part you want to be getting your raw ideas down and moving on. Otherwise you’re going to fall foul of creative exhaustion.

Take it from me, it’s painful and the internal critic’s sergeant-major-style barking only makes it worse. When I find myself caught in this trap, all I can do is work through it, find the draft that pleases the critic or else – by luck or sheer will – force myself to unwind and relax back into the project. Then I can move on and take the novel forward. That’s the essential thing; plenty of time to rework later, and you’ll have a much clearer idea of the work it requires too.

When the time comes, you can let that internal critic go to town. Until then, if yours is as bellicose and exacting as mine, you might want to keep the thing bound and gagged until you’re ready to set it loose.

You can find his books here: 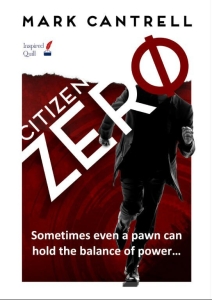 You can find Mark here:

Well, after that horrible down period comes the upswing. This is the part that I wish I could ride forever. My fingers can hardly keep up with my brain. I’m still leaving Alan Shaw 3 to stew for a while. The ideas are coming thick and fast with one in particular that has tickled me into thinking that it’s brilliant (I’ll probably change my mind later), but I think I need a break from the Steampunk world. So, I’ve tinkered with my Cyberpunk novel a little, adding another 1k words. That seems to be going very slowly but I think I need to get into a flow with it, is all. The one I’ve picked up this morning, on a complete whim, is Emi. Remember that one? It was a while ago since I last talked about it:

Two dead humans, a man and a girl, wander through a post-apocalyptic landscape where the creatures of folklore and myth have returned. With their humanity forgotten and no purpose or destination, what could possibly happen?

I still love the idea of this story and I can’t wait to finish it. I think it has real potential to be brilliant…if I don;t mess it up. Right now, it feels a little disjointed and choppy, but it also fits with the style of the book. The character have no human drives or needs, only distantly remembered values that have no bearing or place in their new world.

I love books like this and I’ll admit that it’s a little experimental. I’m not entirely sure where it’s going, or if it has a story at all, but these characters keep going from encounter to encounter and I’m totally hooked on what weirdness will come out next.

It’s also going to be quite short, as I find most experimentally odd novels are, but that’s no bad thing. I think it might actually work in the story’s favour. I guess well have to see.

Anyway, I’m off to write more. Hope you all have an excellent writing day!

As promised, each of Alan’s adventures in the book has it’s own comic book-esque cover.

The first installment begins with Alan as a street urchin, contracted by a mysterious villain to deliver a single package for an outlandish wage. How can Alan refuse? Even when the package starts to tick, and the future of London hangs in the balance? 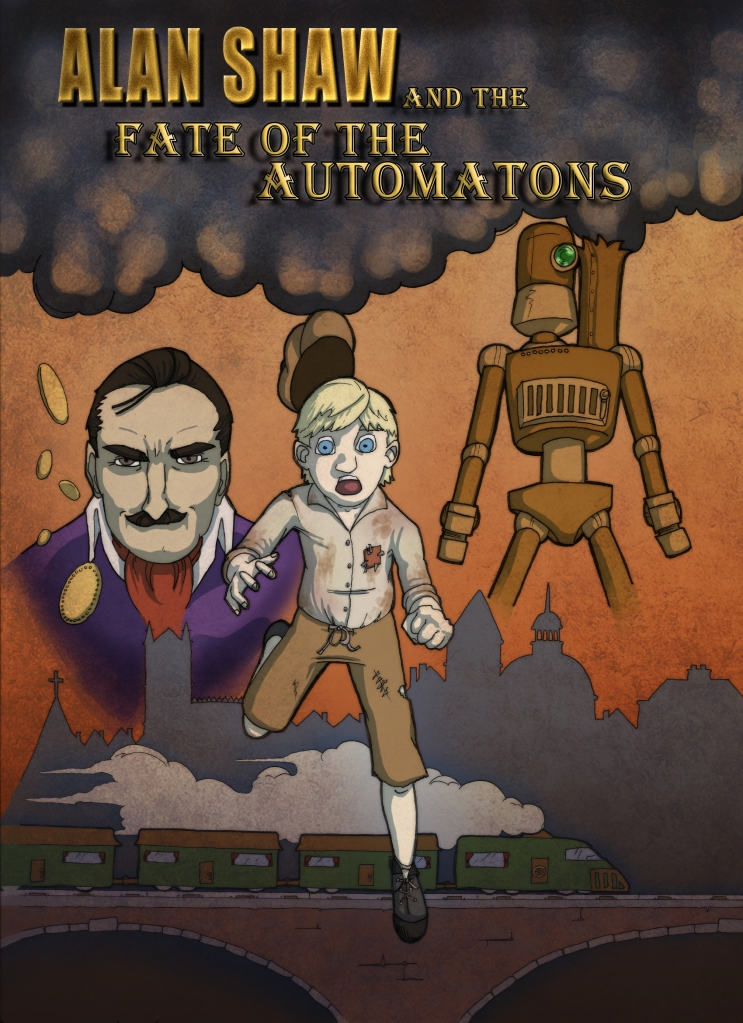 If you’ve been around recently, you’ll already know the big news. If you haven’t…where HAVE you been? Oh, you have a life? Well, I hear they’re overrated. I won’t hold it against you. Better late than never.

Anyway, in honour of the publication of my debut novel, Greaveburn, I have decided to have a bonanza. Some lucky bugger is going to win things and that could mean YOU! But I’m not going to make it easy for you. Why would I? This isn’t the kind of giveaway you find on daytime tv where the question is something like:

What is the name of the money-winning organisation for which millions of people buy tickets every week? Is it:
A: The National Lottery
B: The National Pottery
C: The National Mockery
(answers on a postcard, kids!)

No, we’re not going to do that, because that’d be crap. Instead, we’re going to go all Challenge Anneka on you. Below, you will find a couple of Greaveburn-related images. Your mission, if you choose to accept it, is to take one of these images (or one of your own making) and use it in the most imaginative way possible. The most outrageous/funny/obscure entry wins a personalised, signed copy of Greaveburn itself for your shelf and, of course, all entries will be put into a gallery for everyone to see and share (We’ll keep track of them on the new competition page). All mediums are accepted, including photos, vids, animations or whatever else you deranged readers can come up with.

Here are a few ideas to get you going:

I’m going to leave this open until the end of September, so pop back and see if you’ve won!